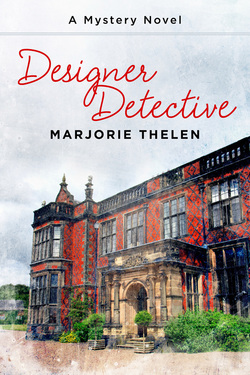 Fiona Marlowe, interior designer to the rich and powerful, discovers her wealthy old client dead in his library and helps his wild west relatives solve the mystery of his demise. It is set in the Washington DC metro area.

The first book is Designer Detective.   The second book, High Desert Detective,  is set on the Oregon frontier. Fiona Marlowe goes west to claim the old bunkhouse that Opal promised her. But Fiona runs into more than she bargains for, and she and Jake are once again lost in mysterious happenings.

I am a sucker for a good cozy mystery book! Now that it’s winter here in Melbourne, there is nothing better than snuggling up in front of the heater with a hot cup of coffee and a good book while listening to the rain flooding your backyard… ahh good times!

I purchased Designer Detective for my Kindle recently and just loved it! Our main character, Fiona Marlowe: an interior designer who finds her (extremely well off) client dead in his library is thrown right into the deep end as she tries to solve the mystery surrounding the man’s strange death. Fiona teams up with a detective who has been hired by the dead man’s loopy sister to secretly investigate the suspected murder. Fiona’s curiosity gets the better of her as she inadvertently becomes entangled in the man’s family affairs and enters a world of secrets, spies, gunfights and all out mayhem.

A fast moving mystery, I felt the writing to be intriguing and thrilling. The story did take a few unexpected turns which kept the narrative flowing. I particularly enjoyed getting to know our leading lady Fiona and found her to be a lovable character.

Although there is not much discussion or attention on her profession as an interior designer, there are a few little interesting thoughts on the topic thrown about in the book without being too obvious about it, which I did appreciate.

The next book in the series is due to be released this year so I’m definitely keeping an eye out for that one! In the meantime, have a look at the author’s website to view more of her books and news: