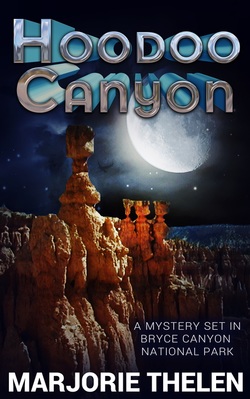 A top secret physics conference.
A remote back country campsite.
Conference organizer doesn't show.
An alien does.
The Birth of Hoodoo Canyon

The novel started with a visit to Bryce Canyon National Park in May 2012.  My husband and I stayed at the Lodge and hiked some of the trails. The more I looked around the more I thought this would be a great place for a mystery. With reading all those theoretical physics books, I knew I wanted some physicists to figure in, and I didn’t want an outright murder since I don’t write murder mysteries, so someone had to disappear. That’s how I start a book, with a few loose ideas.

At BCNP I talked to one of the park rangers, Jan Stock, who was Fee Manager and Volunteer Coordinator. Explaining that I wrote mysteries, I asked her if there were any unusual things that happened in the park. She thought about it and said not much beyond the odd camera theft. Then she thought some more and said that there was something odd. About six times a year people send back rocks they stole from the park, because they started having all kinds of bad luck in their lives and thought the rocks were the cause. They even tell where they stole the rocks from so the rangers can put them back to appease the hoodoo gods.  True story, I kid you not.

Daniel Fagergren, Chief of Resource Management and Visitor Protection at Bryce Canyon National Park, helped with details in the story, like they have sheriffs not police. He is now Escalante District Ranger of Glen Canyon National Recreation Area. He graciously read the advance manuscript and offered helped advice on park details. He wrote:  “There actually is an area of white hoodoos in the Grande Staircase Escalante National Monument called Devil's Garden. It's a beautiful, magical little area.  It's much further east than where Eloise and Murray would have ended up after a day and a half of hiking but it fits the general story line.”  About the scene in the book with Murray and Eloise at the spring, he said, “At El Morro National Monument in New Mexico there are petroglyphs in the sandstone that lead to a hidden pool/spring of water. The petroglyphs depict a series of hands and then birds moving up the rock face to wavy lines depicting water just before a large crevasse in the rock.  A local Zuni Elder came to the monument and interpreted the glyphs.  He said the glyphs tell weary travelers that if they use their hands and follow where the birds go they will find water. About 20' up inside the crevasse behind the wall with the glyphs is a fresh pool of water.”

When Ranger Fagergren finished the book he wrote, “Enjoyed the book. No further comments concerning the book, but in the irony of all ironies, about a week after I told you about the "real" Hoodoo Canyon known as Devil's Garden, several visitors reported to 911 dispatch that a strange aircraft (UFO) flew right over their heads, causing a loud boom. The aircraft then flew over the adjacent bluff, called Fifty Mile Mountain, where it disappeared. The visitors then reported seeing two large clouds of smoke coming up from behind Fifty Mile Mountain. The sheriff thought that it had possibly crashed and sent ground units in to investigate and placed a helicopter on standby. The ground units never found anything so the helicopter was told to stand-down. The military often conducts test flights in the area so the sheriff called the nearest airbase, but they were extremely tight lipped about what might have been.”

So you never know. Not everything is as it seems.  Maybe it was Mur Ray.

What I try to key off in this novel and in my sci fi novels is Arthur C. Clarke's statement "Any sufficiently advanced technology is indistinguishable from magic." I spend quite a bit of time reading theoretical physics books. Dr. Lisa Randall, who's the inspiration for Eloise Bright, has a book Warped Passages -- Unraveling the Mysteries of the Universe's Hidden Dimensions that lays out the math for other dimensions.  Whether they exist or not has not been proven experientially. They are only theories. Neil de Grasse-Tyson is the inspiration for Robert Blank. I watch his shows on NOVA and the Cosmos series and have read one or two of his books. While I know no theoretical physicists personally, I've watched them on World Science U and YouTube panels and symposiums. While scientists in general would be a hard group to convince about aliens, I think a physicist, given the right math equations could be swayed or at least nudged, especially out in the middle of nowhere where not everything is as it seems. One could start asking, what is real here? That's what I'm exploring in this book. There's also the Search for Extraterrestrial Intelligence Institute (SETI) that I mention in the book, which "seeks evidence of life in the universe by looking for some signature of its technology." The Director for SETI Research, Dr. Jill Tarter, is a woman who is another of the inspirations for Eloise Bright. I bet if she were in Eloise Bright's shoes, she'd be mighty interested in Murray and his equations. Another interesting book is Our Mathematical Universe -- My Quest  for the Ultimate Reality of Nature. The author, Dr. Max Tegmark, basically says we are all a math equation, among a lot of other interesting stuff. Math equations are Eloise's and Murray's common ground and means of communication.

Not many scientists are going to read this book.  I'm in the mystery, adventure, fantasy market with Hoodoo Canyon -- the fast read, immediate gratification group. I think there will be readers who don't buy that a physicist would be easily taken with the alien thing, but there'll be some that buy right in because they want to believe that such a scenario is possible.