Fairchild
Fairchild and Midnight are my two writer buddies. They supply inspiration. The Muse likes them. 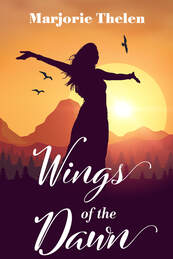 Digital cover for my eleventh book: Wings of the Dawn, historical fiction about a former slave who leaves New Orleans in 1853 to join the overland migration to California. She seeks to escape her past and slavery. Her journey becomes one of transformation.